Foreign affairs, employment, globalisation, economic growth, the Hong Kong Special Administrative Region (SAR), and cross-Strait relations, all were subjects touched on today at Chinese Premier Li Keqiang’s press conference. He took reporter questions at the Great Hall of the People in Beijing, following the closing meeting of the Fifth Session of the 12th National People’s Congress.
Foreign affairs
Premier Li described his optimism towards the future of China-US relations, with both sides sharing common interests after several decades of growth. While differences exist between the two countries — new US President Donald Trump has levelled criticism at China over US job losses, national security issues and currency policy — Li said it’s important for both countries to uphold their strategic interests.
Li said up to 1 million jobs were created in the US last year because of its relations with China. He also made reference to a recent article by an authoritative international think tank, which said if China and the US entered a trade war, it would be foreign-invested companies, in particular US firms, that would bear the brunt.
Li went on to add that diplomatic authorities of both sides are already engaged, concerning a face-to-face meeting between the leaders of both countries, following reports by US media that Donald Trump is preparing to host Chinese President Xi Jinping next month in the US.
When asked about economic relations between China and Russia, Premier Li pointed to comments he made last year, when he expressed the hope that business relations between the two neighbours would turn a corner and achieve strong growth – comments that he said had since been proved right, despite a sluggish global economic recovery, anaemic global trade and declining international energy prices. Looking ahead to the future, Li said there is still tremendous untapped potential for China-Russia ties.
As for China’s relations with the European Union – China’s biggest trading partner – Li said China has no intention of deliberately pursuing a trade surplus with the region, and called on the EU to end constraints on the export of high tech goods to China to offset any trade imbalance.
Li expressed his hope that negotiations with the EU on a bilateral investment treaty would continue to move forward, and promised that EU companies will be given wider access to the Chinese market, and will receive the same treatment as domestic enterprises. Li voiced his support for a prosperous and stable EU, a strong euro currency, and greater EU integration, expressing optimism over the future of the EU, and China-EU relations. 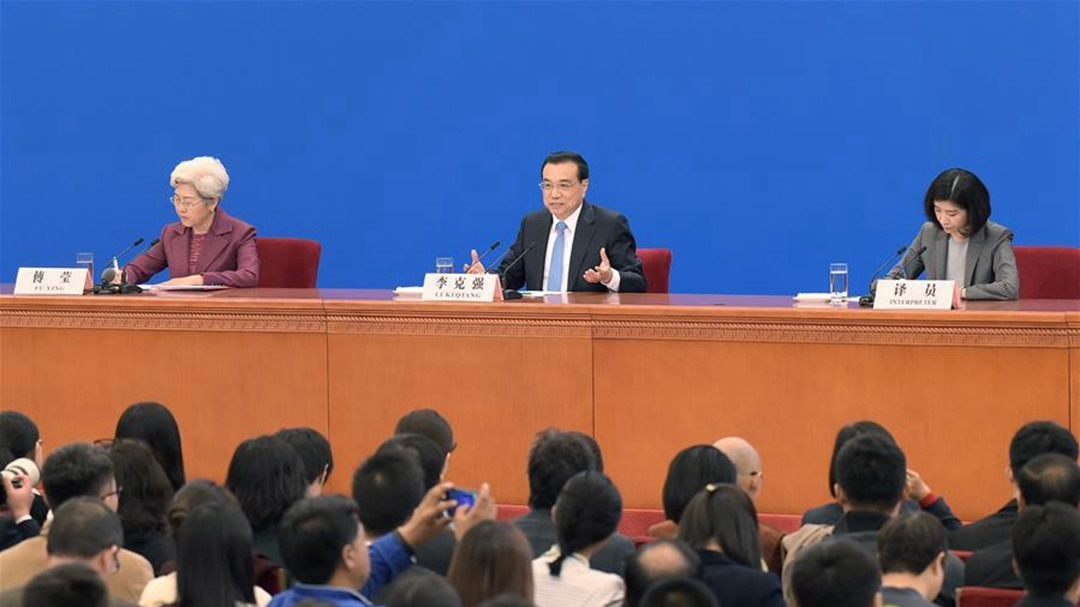 Employment
The government work report, released earlier during the Two Sessions period, forecast greater pressure on employment, with overcapacity cuts in the steel and coal sectors set to lay off more workers. Premier Li looked to address concerns and dispel worries over mass-unemployment, referring to the country’s target of achieving GDP growth of 6.5 percent in 2017, with the most important aim of that growth being to ensure employment.
Li reflected on the increasing number of job seekers in the labor market over the past few years, and looked ahead this year to 7.95 million university graduates, five million graduates from vocational education and an additional 100,000 laid-off workers entering the job market. He said the government would create an environment and the necessary conditions for people to use their own hard work to generate their own opportunities, rather than relying on the government to provide them with an “iron rice bowl”.
The Chinese premier stressed that the government would not allow for mass unemployment, insisting that the conditions are in place for authorities to help meet the basic needs of those facing difficulty in getting jobs and obtaining basic living requirements.
To boost employment, Li emphasized the importance of government reforms that would streamline administration and cut red tape, and aid mass-entrepreneurship and innovation, which will prove to be key drivers of employment in new and traditional industries, and play an important role in China’s supply-side reform.
Economic globalisation and the Chinese economy
After President Xi Jinping voiced China’s firm support for economic globalisation at the World Economic Forum at Davos earlier this year, China has been seen as a key advocate for free trade and the health of the global economy, against a backdrop of growing protectionism in the West. Addressing a question that asked what actions China is taking to back up this stance, amid criticism from overseas for unfair trade practices and not opening up its economy fast enough, Premier Li said that the country will remain committed to opening up, and pointed to China’s establishment of 11 free trade zones, as well as its moving up 18 spots in the World Bank’s ease of doing business ranking since 2013.
Li called on all countries to work together to push forward the liberalization of global trade, underlining that globalization and the trend of global peaceful development are indivisible.
In terms of China’s monetary policy, Premier Li stressed that China would continue with market-oriented reforms concerning its renminbi currency, continuing to contribute to the stability of the global currency system.
Li underlined that China would remain a strong economic force in the face of a sluggish global economy, saying that China’s target of achieving GDP growth of 6.5 percent this year was not a low target, nor would it be easy to achieve. He described how China’s contribution to the global economy would not decrease, thanks to a greater focus on enhancing the quality of China’s growth.
The premier said that the government was fully aware of potential economic risks, and would take prompt and targeted measures to prevent them from spreading, emphasizing that China’s economy was generally safe and without systemic risks.
Hong Kong and cross-Strait ties
Ahead of the election of a new chief executive in the Hong Kong SAR, against a backdrop of growing divisions in the region, Premier Li said the principle of One Country, Two Systems needed to be implemented in its entirety. He pledged the central government’s support for Hong Kong’s development, highlighted the 2016 launch of the Shenzhen-Hong Kong stock connect system, and spoke of how the government is considering launching a bond market connection between the mainland and Hong Kong, an innovative move that would give overseas capital access to mainland markets, and help the SAR maintain its status as an international finance centre.
With regards to cross-Strait ties, Li spoke of the fraternal bond that exists between the people on both sides, pressing that history could not be changed, and that both sides belong to one and the same China. Li pointed to how the peaceful growth of cross-Strait relations would bring new opportunities for people in Taiwan – with five million visits made by people in Taiwan to the mainland last year, more policies will be introduced to make it easier for Taiwan people to work, visit and live on the mainland.
Source CGTN
share on See other articles»